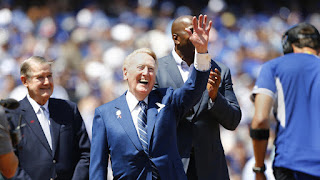 Why?  Why breathe?  It just has always been.  On the eve of his retirement, I decided to ponder the issue.

When I think about it, I owe a great deal to Vinnie for who I am today. (To my detractors, don’t blame him for the naughty bits.)  Certainly not in the same way as I owe my parents who raised me with values and my siblings with whom I competed for academic and athletic glory (never besting them, dammit), but Vinnie was there for me.  I don’t know him.  He doesn’t know me.  But he was there for me.  And, I’d like to think, I was there for him.

First, there’s baseball.  I am an avid fan. AVID.  Dodger. Fan.  Got my first glove at age six, so I can’t remember a time when I didn’t follow the Dodgers.  Why?  It didn’t come from Dad; he’s a football fan.  Mom was a casual follower of baseball with her dad (who was at the time a Gnat fan (*hurl*)) and later came to love the game as I loved it, so it didn’t come from her either.  I don’t remember not being a Dodger fan.  It had to have come from Vinnie.

My sister and I shared a room and a clock radio that was turned to one station: KFI.  Lohman and Barkley in the morning, music in the afternoon, and Vinnie and the Dodgers at night and on weekends.  I don’t know why he caught my attention.  I had never seen a baseball game.  I have to imagine it was the lilt in his voice, his ability to paint a picture with words, his story-telling, that grabbed me.  Vinnie doesn’t just call a ball game.  He weaves history and human interest and current events into his play-calling so seamlessly that you don’t even realize that you’re learning something new.  I was hooked.

Vinnie opened up my world view.  My interest in baseball grew from just listening to the radio and occasionally catching a glimpse on TV to wanting to read about it.  How are my boys doing?  Let’s check the sports page.  Gee, I’d like to know more about this Jackie Robinson guy.  Let’s go to the library.  Eventually, my interests gravitated towards other parts of the newspaper (comics, Dear Abby, and eventually, the news) and other parts of the library (especially biographies).  Reading is fun.  There’s lots of stuff to learn.  Vinnie taught me that.

Vinnie helped me do well in school.  Baseball undoubtedly helped me in math.  I’d calculate fractions in my head: “2/5, that’s a .400 batting percentage . . . .” [My brother the finance major used money, hey, whatever works.] Vinnie helped me with history.  Vinnie would share stories of the baseball players of yesteryear, about growing up in up during the Depression, World War II, etc.  It sparked my interest to read more and talk to my elders about those times as well.

Vinnie was responsible for much of the family entertainment.  We certainly weren’t poor, but not much of the budget went for entertainment.  But we had the Dodgers.  Two bucks for the parents, seventy-five cents for the kids for top deck seats, you couldn’t beat it.  Well, yes you could: six Pepsi bottletops and $2 got you six tickets, a T-shirt, photos, and a bunch of other stuff.  And good grades got you free “A-Students” tickets.  So, I guess Vinnie is also responsible for my being cheap (uh, frugal).

Without realizing it, years of listening to Vinnie weave facts and stories also helped me in my profession as an attorney.   During the past year, I’ve heard many a game caller discuss “Vinnie the broadcaster” and what makes him so great at what he does.  I realize their comments apply equally to my career as an attorney.   Keep it simple.  Modulate your voice.  Be professional.  Be humble.  And when you’ve said it all, be silent.

Vinnie has given me so much.  I hope as a member of his audience for the past 50 years, I have in some way given back to him.

From the bottom of my heart, thank you Vinnie.